Developed by Treyarch and first released in November, 2010, Call of Duty: Black Ops quickly became a worldwide phenomenon. Selling around 5.6 million copies worldwide in 24 hours, this game smashed the previous record by over 2.3 million. In less than a year, Activision which promotes this product reported a whopping $1 billion in sales alone with over 25 million copies sold. In just terms of sheer popularity, Call of Duty: Black Ops is certainly one of the most popular video games ever sold.

In essence, first person shooter games like this one are semi-role playing games where you take on a campaign behind enemy lines. Your player is part of a special forces unit conducting black operations. You can choose from a variety of character that features distinct voices and traits so you can immerse yourself into your role.

Call of Duty: Black Ops is a first person shooter game in the tradition of the original Call of Duty line. In the game you are the foot soldier who wields a variety of weapons at your disposal. While you can only carry two weapons at a time while throwing grenades and other explosive devices as well, there are new options to pick up or choose weapons that meet your liking. Of the new weapons introduced in this version, one of the most interesting is the crossbow, complete with explosive ammunition, Dragon’s Breath rounds and ballistic knives to name a few.

As a character, you can stand, crouch or go prone when needed. Whichever stance you choose will affect how you can move, the accuracy of aiming your weapons and your ability to sneak past or go unnoticed by the enemy. With your on-screen character being in top physical condition, you can quickly change from standing to running to going prone all in a matter of a second or less.

Each mission is unique and features a series of objectives that you must accomplish in order to win. The heads-up display will notate what must be accomplished and help direct you to the location. You will have friendly troops by your side, although in some missions such as the flying the SR-71 or Hind helicopter you are alone in the cockpit.

Black Ops: Call of Duty is augmented by several cinematic moments that help highlight the game, such as the “bullet” effect featured in the “Victor Charlie” level that is activated when player fires towards the last of the enemy.

If your healthy should suffer to the point where you are in danger of being eliminated, the screen will glow red. Your health can recover as well if you take no more damage over a certain period of time.

One of the more interesting aspects of the game is the indicator markers which appear at the top of the screen. For example, if you are near a grenade that is about to explode, you can see where it is in relationship to your character so you can have the option of running or throwing the grenade back.

A sequel, Call of Duty: Black Ops II was released in November, 2012 to very high sales numbers as well, continuing this particular line of first person shooter games as being some of the most popular on the market today. 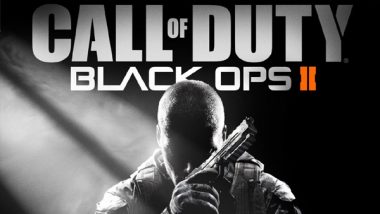